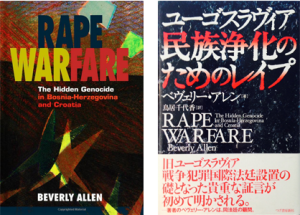 Rape Warfare: The Hidden Genocide in Bosnia-Herzegovina and Croatia

“Allen provides a compelling testimony and analysis of the horrifying phenomenon of “a military policy of rape for the purpose of genocide.” She examines the complexity of identity in Bosnia-Herzegovina and Croatia through the accounts of rape/death camp survivors and those who work to help them. By turns personal, polemical, and informative, Rape Warfare is a lucid guide for anyone seeking to make sense of what is happening in Bosnia-Herzegovina and Croatia.
Rape Warfare is a passionate, moving, informative, and personal account of the complex history and contemporary mass femicidal and genocidal campaign by the Serbs against the people of Bosnia-Herzegovina and Croatia. Informed by a feminist perspective, Allen highlights the murderous misogyny coupled with rabid nationalism behind the rape/death camp—just one manifestation of a military policy of rape for the purpose of genocide. She also outlines the many ways in which individuals and governments can help to end this second 20th century holocaust in Europe. Invaluable. A must-read book for everyone concerned or confused about the atrocities that continue to be perpetrated daily in that region of the world.”
-Diana E. H. Russell, author of “The Politics of Rape”

“A relentlessly researched and passionately argued document. . .”
-Tobias Wolff, author of “This Boy’s Life, In Pharoah’s Army and others.”

“Rape Warfare is a compelling book and should be read by all military officers who will serve or are serving overseas.”
-LTC David G. Bradford, USAF